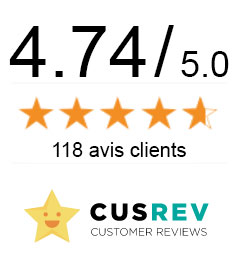 What difference between STANDARD and PRO ?

This Lithium-ion 12V-40Ah battery has been designed thanks to the know-how of PowerTech Systems, french company specialized in the conception of high performance lithium-ion batteries.

The PowerBrick® 12V-40Ah battery offers a high level of safety through the use of cylindrical cells using Lithium Iron Phosphate LiFe (LiFePO4) technology. the battery embeds an innovative control system (BMS, Battery Management System) that ensures a very high level of safety during operation. The BMS constantly monitors and balances the cells of the battery. BMS also protects battery from misuse and increases its lifespan.

The 12V-40Ah lithium battery is protected by a waterproof ABS case that resists to water projection and dust (IP55 for PowerBrick® STANDARD battery or IP66 for PowerBrick® PRO+ version).

The PowerBrick® product line has been designed to replace lead-acid batteries. It offers high energy density, for a low weight and a small space requirement.
The electrical parameters of PowerBrick® are compatible in all respects with those of a 12V lead-acid battery. There is almost never need to replace original charger to use a PowerBrick®, as soon as the charger is delivering voltage within the product specification.

Caution : This battery is a traction or utility battery designed to deliver high levels of current. It may not be suitable for starting an internal combustion engine.
If you nevertheless have to crank an internal combustion engine, check that the current level of the starter motor is compatible with the maximum current that the battery can deliver.
If you are looking for a dedicated engine start battery, please see the PowerStart product range.

Each PowerBrick 12V-40Ah lithium battery has a nominal voltage of 12.8V. It can be connected in series (up to 4 batteries in series) and in parallel (up to 16 batteries for PRO version). Thanks to its technology, the PowerBrick 12V-40Ah battery can be installed in any position (lying on the side, upside down, etc.).
The final assembly voltage can be from 12V, up to 48V (with 4 elements in series). This covers almost most common electrical applications (traction, solar storage, wind power).
For an application with a voltage greater than 75VDC, the installer must be trained to the risks of low voltage (LV)

The PowerBrick® 12V-40Ah is designed to drop-in replacement of old generation Lead acid batteries. VRLA and AGM batteries provides poor performances and are harmful for the environment through the use of heavy metals and acid electrolytes.

All datasheets are available for each product, making it possible to compare the performances of the different products.

For example, here are the differences between the two ranges for the PowerBrick 12V-100Ah:

How safe are Lithium-Ion PowerBrick® batteries ?

PowerBrick® batteries are using Lithium Iron Phosphate chemistry (LFP) that is one of the most safe Lithium-Ion technology. This chemistry is not subject to thermal runaway, is non-flammable and is considered as non-hazardous by international regulation standards.

Each battery is fitted with a high quality Battery Management System (BMS) that ensure a safeguard role during battery operation. The BMS is designed to deliver high power in complete safety for a very large spectrum of applications,

What can i use PowerBrick® battery for ?

PowerBrick® batteries are commonly used for Marine, Recreational vehicles, Golf Cart applications, CCTV, robotics, PV energy storage, etc. PowerBrick® Battery can be used for any system or application that would normally use Lead acid battery (AGM, GEL) in 12V, up to 48V.

Do i need to recharge battery immediately after operation ?

PowerBrick® lithium-ion 12V, 24V or 48V batteries can be partially charged or discharged unlike Lead Acid batteries that needs to be fully charged after use or before storage. For instance, you can leave your battery half charged for some weeks without any issue.

If you plan to store battery for a long period (> 2 month), you need to charge battery at minimum 25% of SoC (State of Charge) before storage. It is necessary to check battery voltage every 6 month during storage.

Does the PowerBrick® battery is suitable to crank an internal combustion engine?

The PowerBrick® battery is a traction or utility battery designed to deliver high levels of current.
Depending on the type and displacement of the engine, the battery may not be suitable for starting the engine.
Check that the starter current level is compatible with the maximum current that the battery can deliver.

If you are looking for a dedicated engine start battery, please see the PowerStart product range.

Is the PowerBrick® compatible with my alternator?
Alternator are usually regulated and provide a voltage between 14.2V and 14.8v when operating.
PowerBrick® battery has a built-in BMS that is able to limit charge current when voltage is greater than 14.4V : unlike conventional Lithium starter batteries, the BMS does not immediately cut-off charge as soon battery is reaching maximum voltage, but it will decrease incoming current using a PWM (Pulse Width Modulation) device until battery is totally charged and balanced.

This innovative BMS system allow full protection and charge, even if alternator is not properly regulated or if it delivers a slightly voltage greater than battery max charge voltage.
How do I charge a PowerBrick® Lithium-ion battery ?

PowerBrick® lithium ion technology uses the latest and most advanced built-in battery management system (BMS) to monitor and prevent damage to the battery during use. You may utilize a Lead-acid charger with PowerBrick® Lithium battery, but some customers prefers using a Lithium charger to keep a better lifespan.

How long does a PowerBrick® battery last ?

Once this number of cycles has been completed, the battery will still be able to deliver about 80% of its initial energy.


In term of time duration, If you discharge 80% of the PowerBrick® and then recharge it every day, 7 days a week for height years, you will still have 80% of usable battery energy left. This is a large increase in lifespan compared to a conventional Lead Acid battery (AGM, Gel) rated at 500 cycles for 50% DoD cycles.

PowerBrick-Cycles
What is the Battery Management System (BMS) and how does it work ?

Each PowerBrick® embeds a built-in BMS. This BMS is a high-tech design that manage two main aspects of battery during operation :

The PowerBrick® products are designed around an assembly of sealed cells. There is no risk of electrolyte leak. The whole of the block cells and embarked electronics is firmly fixed in the battery casing.

All our batteries can be placed in any positions (tilted or lying). There is no obligation to install them upright, as for the conventional batteries in Lead/AGM.

Show reviews in all languages (8)